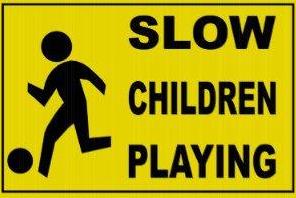 An often heard neighborhood request concerns the posting of generalized warning signs with "Children at Play," "Slow Children" or other similar messages. Parental concern for the safety of children in the streets near home and a misplaced, but wide-spread, public faith in the ability of traffic signs providing protection, often prompt these requests.

At first consideration, it might seem that "Children At Play" type signs would provide protection for youngsters playing in a neighborhood. They do not.

Studies have generally shown that many types of signs attempting to warn of normal conditions in residential areas have failed to achieve the desired safety benefits. Studies made in cities where such signs were widely posted in residential areas showed no evidence of having reduced pedestrian accidents, vehicular speeds, or legal liability.

Children at Play signs have little effect on driver behavior, which is seldom the cause of accidents. An NCHRP study reported that nearly 80 percent of collisions including children resulted from an unsafe or illegal act by the child. The study concluded that no traffic control device could be expected to protect a child.

The signs give parents and children a false sense of security by relying on the signs, parents might monitor their children less closely Children might interpret the sign to mean they can play in the street. Thus, a Children at Play sign can contribute to the very accidents parents seek to avoid.

Because of these serious considerations, the State of Washington does not recognize, and Federal standards strongly discourage use of "Children At Play" type signs.

The City of Kennewick Police Department and Municipal Services Department are quick to point out that we have no adequate answer to the traffic problems which produce these requests.

Unfortunately, we have found all too often most of the traffic problems within neighborhoods are caused by the residents in that area. Perhaps exerting sufficient social pressure on the offender or slowing the pace of modern life might alleviate most of these traffic problems.

For the above reasons the City of Kennewick cannot provide nor allow the use of "Children At Play" signs along public streets.
NOTIFY ME®
UTILITY INFORMATION
REPORT A CONCERN
online services
agendas & minutes
[]