Successful investigations are the result of the police and the community working together to bring justice for victims and their families. Often times this is a direct result of communication between the police and the community. We will provide periodic updates on Sofia’s investigation. Hopefully, this will foster a dialogue which will result in bringing Sofia home.

The Kennewick Police Department received confirmation through DNA testing that the female featured in the social media posts from Culiacan, Sinaloa Mexico is not Sofia.

As a recap, in early March 2021 a social media personality interviewed a female in a town plaza in Culiacan, Sinaloa Mexico. The female had striking physical similarities to Sofia’s childhood photographs. The female, who appeared to be homeless, claimed she was about the same age Sofia would now be, that she had been kidnapped, and did not know where she was from.

Segments of the interview were subsequently posted on TikTok and YouTube. The posts went viral in April 2021, ultimately viewed by approximately 2 million people. One of the viewers commented on the similarities to Sofia. Subsequently, the Kennewick Police Department received dozens of tips about the videos. Due to physical resemblance and comments about having been kidnapped, many believed the female may be Sofia.

The Kennewick PD investigated the TikTok lead for the next several months. The social media personality was identified, contacted, and cooperated with police. Through investigation police identified and contacted alleged family members of the female. They identified the female in the videos, denying she was Sofia. They indicated the female was now in a rehabilitation center.

Since the credibility of the alleged family members was unknown, police were interested in conducting a video chat with the female to ensure she was, in fact, the person featured in the videos. Police also wished to speak with her concerning her claims of being kidnapped, and to ask for a voluntary sample of her DNA to be compared to Sofia’s DNA.

Police contacted the rehabilitation center. They indicated they would not assist police unless ordered to do so by a Mexican court. This left the police in the position of being unable to confirm the female was the same person in the videos.

Police temporarily suspended the investigation so as to not interfere with the female’s treatment. After a month, further attempts were made to try and interview the female in the rehabilitation center. Those efforts were unsuccessful.

Police then contacted the U.S. Border Patrol seeking assistance. They put police in touch with a Mexican consul, who referred police to the appropriate law enforcement authority in Sinaloa. Kennewick police submitted a formal request for assistance to that authority. They advised police would have to pursue the request through the U.S. Department of Justice to comply with formal legal treaties between the two countries.

Kennewick police contacted the FBI, who was very helpful. They coordinated efforts with the FBI Legal Attaché office in Mexico City. In February 2022 FBI authorities succeeded in locating the female, who had been released from the rehabilitation center. The female provided a voluntary DNA sample. Police will honor the family’s request for privacy by not publicly identifying the name of the female.

The Kennewick Police Department thanks; 1) those who provided the initial tips about the videos, 2) the social media personality, 3) the U.S. Border Patrol, 4) the Mexican Consul, 5) the FBI and their Legal Attaché members, 6) the Mexican authorities, 7) the WSP Crime Lab DNA Section, 8) the family of the female, and 9) the female. Without their help and cooperation, police would not have been able to conduct the due diligence that this lead required.

Sofia’s case was featured on the August 23, 2021 episode of The Vanished Podcast, hosted by Marissa Jones. The Vanished Podcast is a true crime podcast on the Wondery network, with over 2 million listeners each month and more than 85 million downloads. The episode can be accessed at http://www.thevanishedpodcast.com/episodes/2021/8/23/episode-301-sofia-juarez

Police continue to follow-up on the TikTok lead. The female allegedly shown in the video reportedly continues to remain in a rehabilitation facility. Police are trying to overcome obstacles to conduct a video chat with the female, discuss with her the comments made in the video, and try to obtain a voluntary DNA sample.

Police also continue to follow-up other leads concerning the suspect and suspect vehicle.

We extend our thanks to those who have contacted us to provide information on this very important case. We encourage others to reach out to us via the Tip Page on this website.

Update on the TikTok video:

Thank you to those who sent the 50 tips on the TikTok video posted under “akayalla”. We also extend our thanks to TikTok personality “ozzbala” (TikTok user name) / “ozz” (YouTube user name) for his cooperation during the investigation.

As noted in the comment sections of the posts, the female in the TikTok videos is currently in a rehabilitation center. We have been in touch with alleged family members who claim she is the person depicted in the videos. They deny she is Sofia, and seek privacy in handling a family matter. We will continue investigation to confirm 1) She is the person in the videos, 2) Inquire about her claims of having been kidnapped, and 3) Verify she is not Sofia through DNA comparison.

As previously noted, a witness observed a female matching Sofia’s description walking along the sidewalk on S. Washington Street near E. 15th Avenue. The observation corresponds to the approximate time that Sofia would have arrived on foot in that area. A person approached the young female.

The witness observed the person, described in detail below, approach the young female and lead her away towards a van that was occupied and stopped at the next side street. Sofia cried as the person laughed.

The adult witness reported the incident to police the next day, immediately after seeing media accounts of Sofia’s disappearance. After viewing a photograph of Sofia, the witness confirmed the young female was Sofia. Police determined the witness to be highly credible.

Police kept the suspect description confidential at the time due to active investigations being conducted on people of interest. A description of the van was released at the time, resulting in 24 tips reported to police.

After a recent complete and thorough review of Sofia’s case, based upon available information at this time and with the benefit of 18-years of investigation into this case, police believe the witness observed the initial stages of Sofia’s abduction. Police currently believe the van and its occupant(s) may be associated with the suspect who led Sofia away.

Police obviously have a very high degree of interest in the suspect and the suspect van. Anybody who has any information on a person and van seen in the area of S. Washington Street near E. 15th Avenue between 8:00 pm and 9:15 pm on February 4, 2003 is asked to contact police. Police are also seeking information from the public on anybody who may have operated a similar type van and either lived nearby, would have passed through the area at that time, or driven by as part of their regular route or routine.

Police are interested in any information people may have, regardless of how minimal it might be. Somebody out there knows what happened to Sofia, or at least have suspicions about someone that may have been involved. Now is the time to come forward and help bring answers to Sofia’s family and our community.

Suspect Description (as provided by witness): Hispanic juvenile male. Estimated to be 11 to 14 years old at the time (now about 29-32 years of age). At the time of occurrence, described as being light complexioned, about 5-00 to 5-02, believed to be “chubby” based primarily upon facial features, having a “baby face” with a possible mark on a cheek, dark short wavy hair about 1.5 inches long that appeared greased that lay flat with bangs, and possibly having big hands for a person his age.

Suspect Vehicle: Light blue or silver (or gray) older 1970’s to early 1980’s type full-sized panel van with no side windows. Had appearances of possibly being a work-type van, the type that contractors or painters may have used. This is not to imply that it would have been a contractor or painter’s van.

A Kennewick couple has very generously offered a $10,000.00 reward for information leading to the discovery of Sofia’s whereabouts. The husband and wife, both of whom request anonymity, were touched by Sofia’s story and would like to do everything they can to help bring resolution for her family.

Thank you to the over 75 people who have called or left tips on the Sofia website over the past month. Previously unknown names and information have been provided. We continue to investigate the TikTok video.

Through investigation a highly credible witness was identified. The witness observed a female matching Sofia’s description walking along the sidewalk on S. Washington Street near E. 15th Avenue. The observation corresponds to the approximate time that Sofia would have arrived on foot in that area. A person approached the young female and led her away as she cried. Police have a detailed description of that person, but are withholding it at this time for investigative purposes.

An occupied van was also observed stopped on a nearby side street. It is described as a light blue or silver (or gray), older 1970’s to early 1980’s full-sized panel van with no side windows. It had the appearance of being a work-type van, the type that contractors or painters may perhaps use. This is not to imply that it would have been a contractor or painter’s van.

Police now have a high degree of interest in this van. Anybody who has any information on a van like this seen in the area of S. Washington Street near E. 15th Avenue between 8:00 pm and 9:15 pm on February 4, 2003 is asked to contact police. Police are also seeking information from the public on anybody who may have operated a similar type van and either lived nearby, would have passed through the area at that time, or driven by as part of their regular route or routine.

We are aware of the TikTok video. Investigation is being conducted into that. Thank you to those who sent information on that video to us. It is appreciated.

A number of tips have been received over the past month. Some of these tips have provided previously unknown information and names. Investigation continues to be conducted into all tips received. On behalf of Sofia’s family and the community, the police department extends their thanks to those who have stepped up and volunteered information to help bring closure for the family.

On February 4, 2021, the 18th anniversary of Sofia’s disappearance, the Washington State Patrol’s Homeward Bound Program unveiled semi-trailer rigs that will drive throughout the country with images of Sofia emblazoned on the sides of their trailers.

The WSP collaborated with Kam-Way Transportation to make this a possibility. In other cases, the Homeward Bound Program has succeeded in generating new leads by displaying the images of missing children on semi-trailers.

These rolling billboards travel across the West Coast and into Canada and Mexico. Sofia is currently one of five children featured in the program. 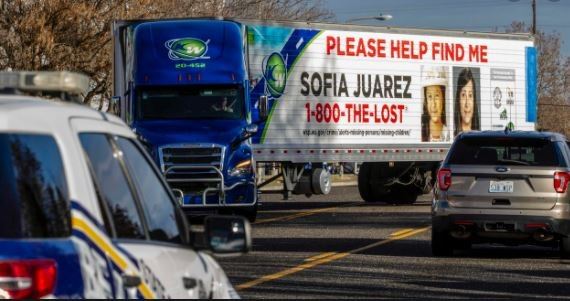 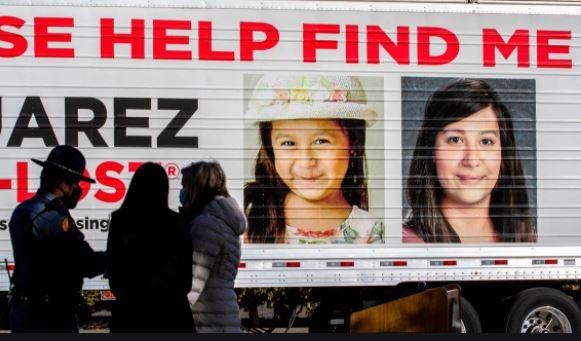